iShowU Audio Capture M1 Review - Is iShowU Good to Use

Apple has disabled the functionality of recording desktop and internal audio in all Macs. What should you do if you need to capture internal audio? iShowU Audio Capture is one workaround you should never miss. Just learn more about the program and how to use iShowU Audio Recorder with OBS to record your desktop. Moreover, we also prepared the best audio recorder alternative to cover you when an inconvenient time occurs. But first, let’s get to know iShowU Audio Capture.

Part 1: What is iShowU Audio Capture

iShowU Audio Capture or the updated version SWB Audio App is an audio driver which serves as an extension of macOS. This tool lengthens the preferences of recording audio on a MacBook. With iShowU Audio Recorder’s new update, it offers features to record audio not just with ease, but with an improvement that helps stable the sound of your recording. Here are the benefits you should know.

1. Stability - as the default audio device will stay to what it was before. Accidentally quitted the app or had a technical issue, there is no means of problem where your recording will disappear.

2. Brilliant - the audio output device will not be switched unless it needs to and likewise for when it needs to switch back.

3. Volume support - adjust the volume during the recording of audio in your computer flawlessly as you expect it to be.

4. Workspace friendly - no issue when switching to another user/workspace because the audio output device will automatically switch back from how it was, and return recording audio when you come back.

1. Work with any app that can record on your macOS, including OBS and Discord.

2. Merge audio from your system audio and microphone at the same time.

3. Support multiple outputs to capture audio from more than one output device.

1. Does not work fully with the updated Big Sur macOS or M1 graphic card.

2. Audio quality decreases drastically when setting as the main output.

3. Cannot hear the line talking when recording your FaceTime videos.

Part 2: How to Use iShowU Audio Capture with OBS

Step 2Once the installation is complete, you set up iShowU as the internal audio device. Search the Audio MIDI Setup on your Mac. Press CMD + space for the searching feature to be activated.

Step 3A new window will pop up. In this window, you need to add a new audio device. Click the + button on the bottom left, choose the Create Multi-Output Device option from the drop-down list.

Select iShowU as your Master Device by checking the box under Use and Drift Correction. Close the window after. 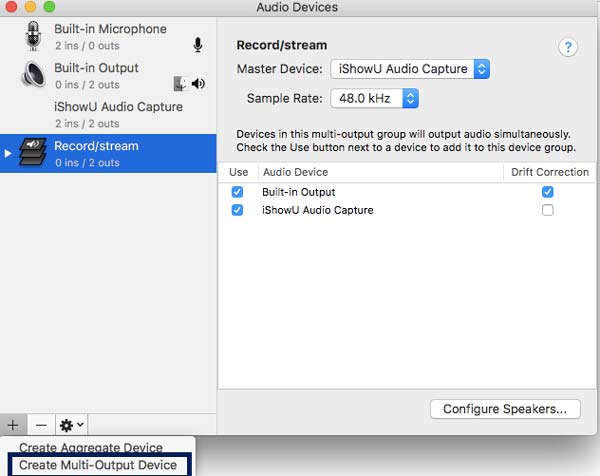 Launch OBS Studio app and set up for the audio recording.

Step 4On OBS, add a new scene and name the new scene to your own liking.

Step 5Add audio for OBS audio recording. Right-click on the Source section and click the Add button, choose the Audio Output Capture option, this will allow OBS to capture the speaker sound.

Step 6Select the iShowU Audio Capture as one of your Mic/Auxiliary Audio Device. Click the OK button and you are good to start audio recording! 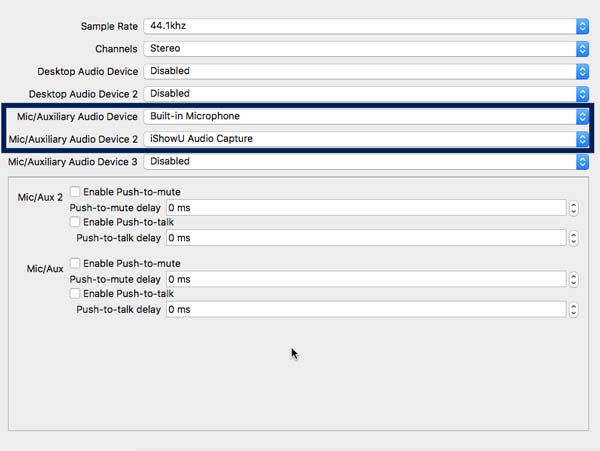 Bear in mind that you can download iShowU Audio Capture on Catalina and that Windows users cannot use this as it is not compatible.

When you need to find an easy iShowU Audio Capture alternative and capture audio files from multiple resources in high quality, AnyRec Screen Recorder is the all-in-one audio recorder with advanced features. It captures audio on Mac as it supports recording internal sound and microphone voice. Moreover, it optimizes your audio recording quality by amplifying, reducing, and stopping unwanted noise in your recording.

Reduce the audio noise and enhance the voice quality for microphone recording.

Provide easy to use interface to record audio files without complicated settings.

Fully compatible with the latest macOS and M1 graphic card.

Step 1Once you have installed AnyRec Screen Recorder for Mac, you can launch the program on your MacBook. Click the Audio Recorder button to record the desired audio files from both system audio and microphone.

Step 2When you go to the Audio Recorder window, you can click the Settings button with the Gear icon to tweak the audio format and more other parameters. Moreover, it also enables you to enable the checkmark before Extended Audio Recording Driver to capture audio files. 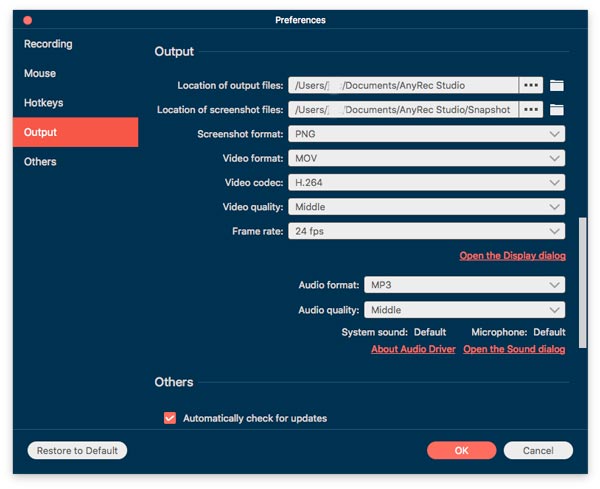 Step 3Turn on System Sound to capture the Internal audio as the iShowU Audio Recorder alternative. When you need to record the voice from a microphone, you can also turn on Microphone accordingly.