Review of Debut Video Capture from All Aspects - Features, Price, Pros, and Cons

Debut Video Capture is a screen recorder for Windows/Mac with all the basic functions and some additional adjusting features. Whether you want to capture the computer screen, record the videos from other devices, or take screenshots on your computer, it will meet your requirements. Since it has a free version for non-commercial usage, you can record audio and video through Debut Video Capture with the limitation to video format, schedule recordings, direct sharing, and other additional features. Here comes a question, is it worth buying the pro version of Debut Video Capture and Screen Recorder with more editing tools? This article will make a professional review of Debut Screen Recorder from its features, pros, and cons.

1. Record from the screen, webcam, and external devices.

Debut Video Capture supports recording videos through three different inputs. With the choice of the full-screen, selected region, and a certain window, you can do all the basic recordings on the screen of your computer. You can also record yourself from the webcam, and capture the videos on your mobiles or cameras through a USB cable. 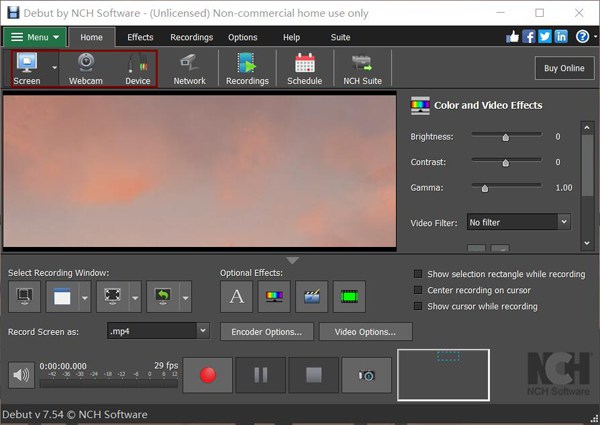 Before you start recording videos on Debut Video Capture, you can click the Effects menu to adjust the recording settings. You can preview the chosen screen and change the settings in real time. Here, you can choose simple filters or adjust the brightness, contrast, and gamma to create unique effects. Moreover, it provides the Green Screen to replace the background, which is helpful for editing videos later. 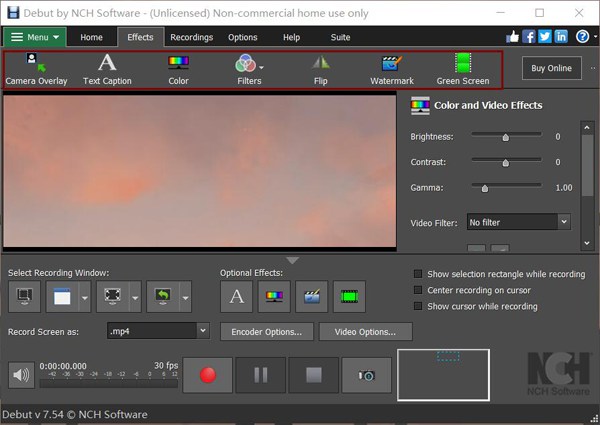 3. Able to edit and convert recordings through the suite.

Although Debut Video Capture doesn't provide any built-in editing tools, you can use the recommended suite - VideoPad to import and edit the recordings. It may be more professional to crop, cut, add music to the videos. But it's too troublesome to download other software when you just want to clip the extra parts. 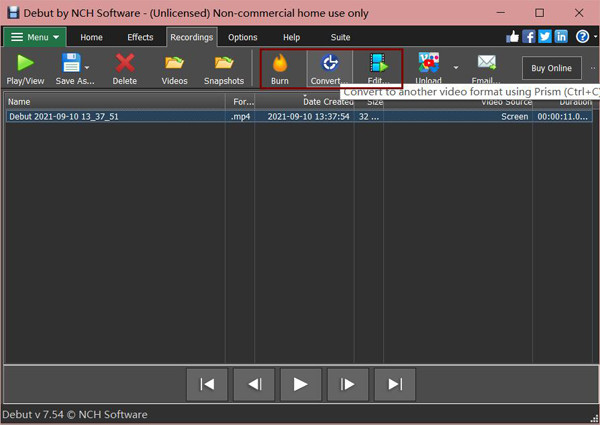 Cons
Complex and not user-friendly interface for beginners.
Limited functions for the free version.
Unable to record audio files only.
Need to download separate software to edit the videos.
Every action needs a few seconds to load.
Have problems syncing the images and sounds.

Is Debut Video Capture worth buying?

No. The Pro version only provides more video formats to export, enables you to share the recordings on social media platforms and add unique watermarks for commercial use. You still can't edit, crop, and clip the recordings through Debut Video Capture. Thus, you'd better take the free version of it as a basic screen recorder or choose the alternatives to Debut Screen Recorder with more features.

Part 3: The Best Alternative to Debut Video Capture for Windows/Mac

Since Debut Video Capture always has problems syncing the images and sounds, you can rely on the best alternative to this software - AnyRec Screen Recorder. This powerful screen recorder supports recording video, audio, and gameplay with real-time annotation easily. What's more, you can adjust the export settings, clip the recordings, and add effects.

Record videos with audio and webcam on Windows/Mac.

Able to Edit the recordings with lines, highlights, etc.

How to record screen through the best alternative to Debut Video Capture:

Free download AnyRec Screen Recorder on your Windows/Mac and launch it. There are three recording modes on the main interface, including recording video, audio, and gameplay. Choose the desired option according to your need.

Choose the Full Screen or Custom button to select the desired region to record. Then turn on the webcam, system sound, and microphone according to your need.

Click the Settings icon and choose the Output option. Then you can adjust the video, audio, and screenshot formats, resolution, and quality. Then click the OK button to go back to the main interface. Click the REC button to start the recording. 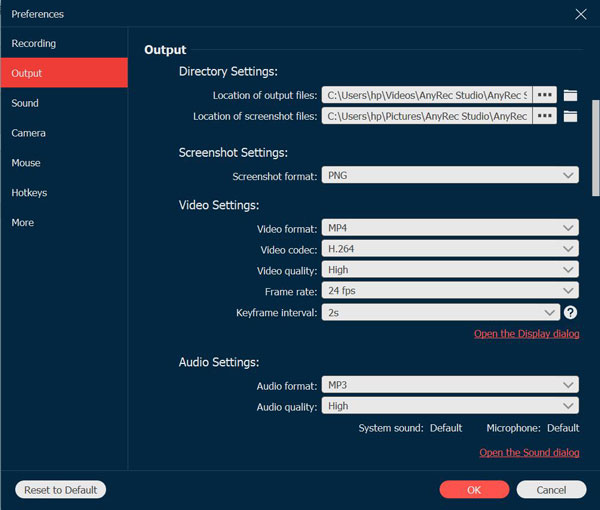 Step 4Edit and save the recordings

After reading this article, you must have known about the features, pros, and cons of Debut Video Capture. It does good on video and screen recording, but it has no additional editing functions. And the pro version of Debut Video Capture only provides some basic adjustment, which is not important. You can try downloading the best alternative - AnyRec Screen Recorder.