Part 1: How to Activate and Record Screen on LG Stylo/G5/G6/G7

If your LG phone is with the system version higher than Android 10, you can directly use the built-in tool to record screen on LG Stylo/G5/G6/G7. In the following article, you are about to learn the detailed method on how to activate the function and screen record on LG Stylo 5/6/7 easily.

Step 1Go to your LG smartphone's Notification Panel or Quick Panel to check if the recording feature is present. If you cannot find the element in the list, tap the Edit button at the top part to add a record button.

Step 2Once you are on the Edit window, you will see all the present buttons displayed at the top. Under it, you will see the unadded ones, including the Screen Recorder button. Tap and drag it at the top and put it in the preferred place.

Step 3After adding the recording button, go to the specific window or app you want to record. Drag Quick Panel and tap Screen Recorder to activate the feature. A prompt will appear on the screen if it's your first time using it. Tap the Agree button to confirm.

Step 4Once done, a 3-second countdown will start then the screen recording on LG devices will initiate. Proceed on recording the window or app. If you want to stop the recording, tap the Stop button on the left part of your LG’s screen.

Smartphones with the Android 11 version have the exact instructions for screen recording on LG. This includes all LG Stylo, G5, G6, G7, and V50.

The built-in screen recorder of LG smartphones is one of the most convenient ways to record onscreen activities on your LG phone. However, there are some struggles with the built-in feature, including the lack of tool options to change the format, screen region, etc. Still, an alternative way to screen record on LG Stylo 4 or 5 is AnyRec Screen Recorder. The software is flexible enough to have a Phone Recorder option to screen record on LG Stylo 5 with high-quality output. It also offers you to change the resolution, mirror flip, rotate, and more.

Easily screen record on LG Stylo 4/5 and all models with the best quality and resolution.

Provide a straightforward interface for easier navigation of the software while recording.

Offer other recording options such as Video, Audio, Webcam, and Game recorders.

No time limitation to record all onscreen activities while keeping the original output.

Step 1Download the software on your computer through the official website. Once you have downloaded and installed it, launch AnyRec Screen Recorder to start screen recording on your LG device. Click the Phone Recorder button from the main interface, and you will see a prompt to connect the two devices. Select the Android button.

Step 2Ensure that the LG and your computer share the same WLAN. Tap the Screencast or Screen Mirror button on your smartphone to detect AnyRec Screen Recorder. Once you see it, tap Screen Recorder, and the phone will mirror on the computer automatically. 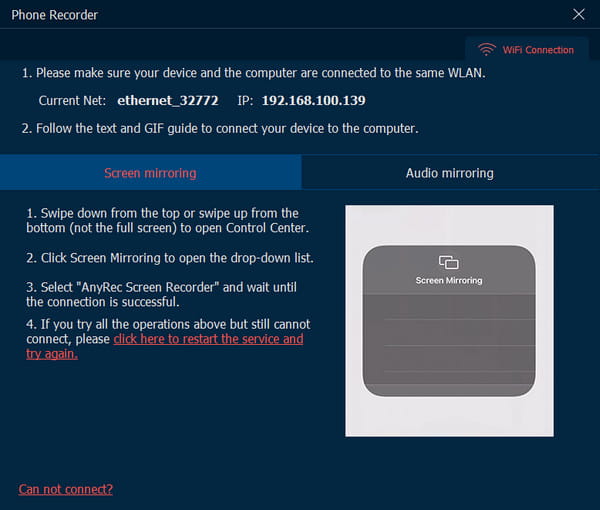 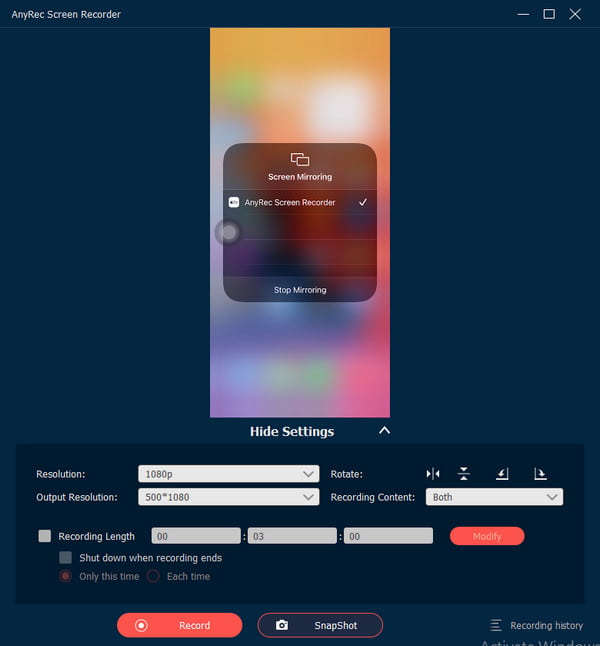 Step 4While recording, you can click the Snapshot button to take a screenshot. Proceed by clicking the Stop button once you are done recording. The recorded LG screen will be automatically saved on AnyRec History. 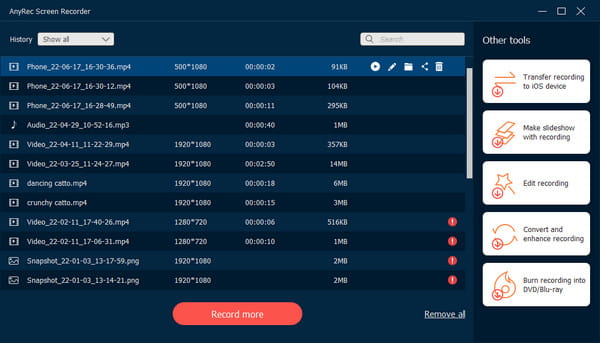 Part 3: FAQs about How to Screen Record on LG Phones

Now that you have learned how to screen record on LG, you can maximize and enjoy the built-in screen recorder of your device. Unfortunately, there are only limited functions you can utilize from the screen recorder, and it is not enough to make a professional-looking video. So, the best way to screen record on LG is to have AnyRec Screen Recorder on your computer. To capture a high-quality output, AnyRec is the best alternative with impressive features you can use. You can always try the tool by free downloading from the official website. Greatness waits for you!

Easily screen record on LG Stylo 4/5 and all models with the best quality and resolution.

Provide a straightforward interface for easier navigation of the software while recording.

Offer other recording options such as Video, Audio, Webcam, and Game recorders.

No time limitation to record all onscreen activities while keeping the original output.