While screen recorder apps have populated Android app markets since Day 1, on the system level, vanilla version of Android and many major manufactures do not include such features. Samsung is one of the few expectations that recently built a decent screen recorder for their latest devices. However, if you are using an older device with outdated OS, while still need to find a way to record the screen on the Samsung phone, you might be having trouble finding out how. No need to worry, we have curated the best possible Samsung screen recorder apps and methods to help you tackle the issue.

If you are rocking the latest Samsung Galaxy S20, S20+, S20 Ultra, and Z Flip devices, you would access the Samsung screen recorder feature under the Quick Panel.

Step 1At the top of the screen, swipe down with two fingers to launch the Samsung Quick Panel.

Step 2Swipe left to access a bunch of toolkits. Locate the Screen Recorder option and tap on it.

Step 3A countdown would be displayed to you. Get ready, the recording will start soon afterward!

Step 4Long press the Screen Recorder option to open the settings tab. You could change the recording resolution, turn the front camera on or off, or change the voice recording settings. 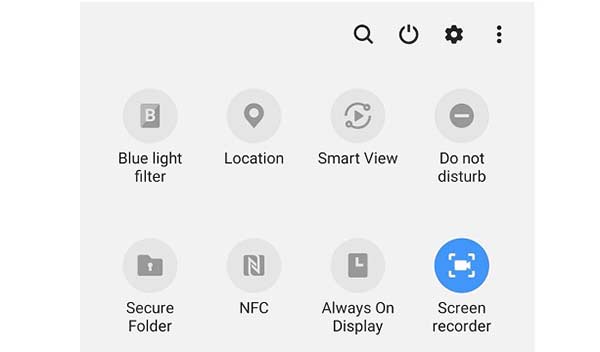 If you are using a Samsung Galaxy Note 10 or Note 10+ Device, you would have the capacity of using the Samsung S Pen and writing on the screen. The Samsung screen recorder would capture your writings on the screen as well.

Part 2. Universal Method to Screen Record on a Samsung Phone

Using a Samsung screen record app to capture the screen footage is the default way provided by Samsung. However, before jumping in, their many disadvantages you need to put into consideration. You can't use Samsung's built-in screen recorder on an older device or non-flagship Samsung phone.

Also, on some Android phones, you couldn't record the internal audio without rooting the device first. On the other hand, many Android apps prohibit screen recording activities due to copyright or DRM limitations (such as recording Instagram Stories, or recording 2021 Tokyo Olympic Games). This would require creative solutions to your problem.

One possible solution is, launching your app in an Android emulator on your computer, then use professional screen recorders to capture the footage instead. In the following guide, we will choose AnyRec Screen Recorder as the selected Samsung screen recorder software. It features all the potential functionalities that you might need to capture your Samsung phone's screen, which includes:

Capture video with any app or custom screen region.

Works on both Windows PC and Mac

Step 1Launch your desired app in an Android emulator application.

Step 2Open AnyRec Screen Recorder. On the main screen of the program, click on the Video Recorder button on the left side of the panel.

Step 3Choose the Custom option on the left side of the next screen. Select the window of your Android emulator application for recording. Turn on the System Sound option as well to record the internal audio.

Step 4Click on the REC button to start recording. A control bar would be displayed on the lower side of your recording window. Once the recording is finished, click on the Stop button to finalize.

Step 5A quick preview would pop up. Use the video editing tools to perform some quick adjustments to your video. Click on the Save button to export the final result.

If you intend to record the gameplay footage on your Samsung device, there is a specific method that works for this purpose solely. Google Play Games has a freely available screen recording tool that could be used as a Samsung phone screen recorder.

Step 1Open Google Play Games App and select the very game you want to record. Tap on the game app's thumbnails for more details. You could see a Record option on the top of the screen.

Step 2Tap on the Record option to select video quality. Unfortunately, only 480p and 720p are available right now.

Step 3Tap on the Launch button to start your game. While your game is booting up, a floating window would be shown on the top of the screen. This is the Google Play Games screen recorder settings window. Tweak the options to change preferences for your voice, camera, and recording video.

Step 4Tap on the red button to start recording. Once you have finished the gameplay, tap on the same button again to finish the process. 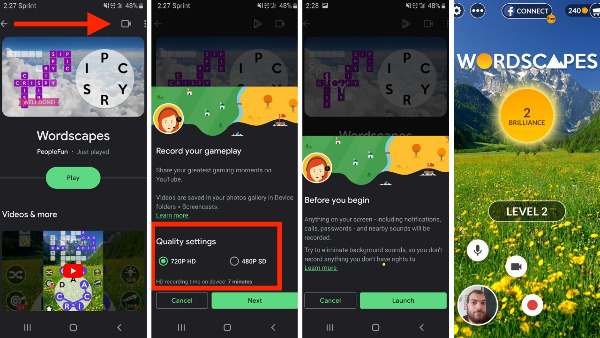 Part 4. FAQs about Screen Recording on a Samsung Phone

There are many possible ways to record screens on a Samsung device. Either using the built-in Samsung screen recorder app or using professional screen recorder software as a workaround, this article has demonstrated to you every step you need to know. Hopefully, the issue you are facing could be resolved without any trouble.