If you want to share the videos, photos, and music with your family members, casting your content on the TV screen, using Apple AirPlay could be the easiest way. At the tap of a button, AirPlay allows you to cast content from one Apple device to another wirelessly. But before using it, you need to turn on AirPlay on your Mac/iPhone first.

In this article, we will break down the details about steps to turn on AirPlay on an Apple device, and the best alternative method to share the screen with a Windows laptop.

Before turning on AirPlay on Mac, you want to enable the feature on your Mac menu bar first to proceed. Keep in mind that despite the convenience of AirPlay, it only works across Apple devices.

Step 1Open the System Preferences app, and click on the Displays option.

Step 2On the Displays tab, find the Show Mirroring Options in the Menu Bar When Available option on the bottom of the window. Enable the option to turn on the AirPlay icon on the menu bar. 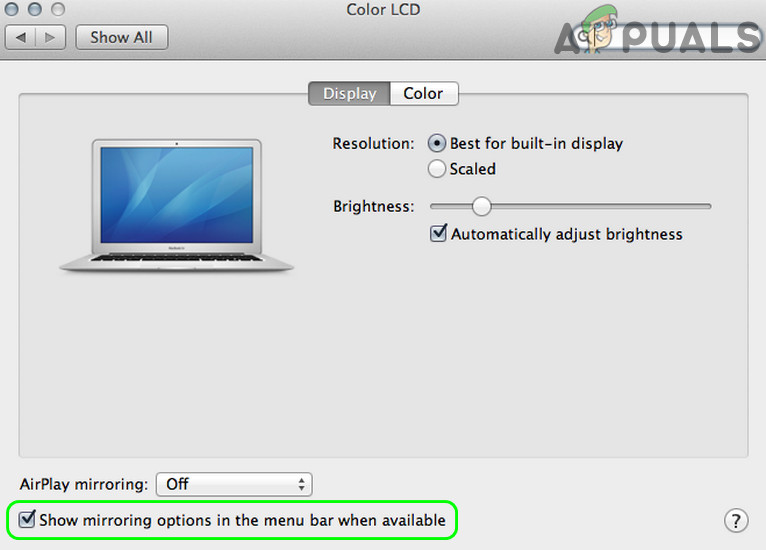 Part 2. How to Use AirPlay on Mac (Mirror Your Mac Screen)

If you are using a Mac released later than 2011, you would be entitled to turn on the AirPlay feature on your device. As long as the compatible device is connected to the same network as your Mac, you could use the method we suggested down below to share a screen easily.

Step 1Click on the AirPlay button on the menu bar. Select the device you wish to cast your Mac screen. 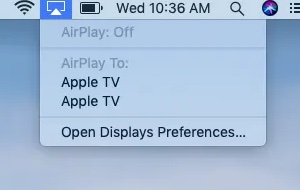 Step 2A window would prompt up instructing you to enter a code. Enter the code matching the screen to proceed.

Step 3After the screen mirroring is completed, click on the AirPlay button on the menu bar and choose the Turn AirPlay Off option to switch the feature off.

If you are having trouble making AirPlay work on your Mac, read this guide to fix your related issues.

Speaking about mirroring your Mac screen with AirPlay, it will fall short if you try to share content with a non-Apple branded device. In this case, an alternative method could be sharing a file of screen recording.

To get the best recording quality without any compromise, a professional screen recorder could be your best option, ideally equipped with editing tools and supports plenty of video codecs. AnyRec Screen Recorder is by far the best candidate available on the market. It not only has powerful video capturing tools but also works as a great video editor with a variety of built-in templates and special effects. Other vital features include:

Step 1Install the professional screen recorder for Mac. Open the program and click on the Video Recorder button on the left side of the screen.

Step 2On the next screen, choose to record either the full screen or a region of the screen by clicking on the panel on the left. You could select a range between 640*480 and 1920*1080.

Step 3Enable the System Sound option to capture audio from your Mac screen. If you wish to add a layer of voice commentary, turn on the Microphone option as well. After that, click on the REC button to start recording.

Step 4Once the recording is finished, click on the Stop button. A quick preview window would pop up. Make necessary edits with the built-in editing tools to your video, and eventually click on the Save button to complete.

Part 4. FAQs about How to Turn On AirPlay on Mac

In this article, we have reviewed possible ways to turn on AirPlay on Mac, and the best screen recording software to capture your Mac screen. Compared to other screencasting solutions, it is safe to say that Apple AirPlay gives the best performance and consistency without any technical requirements for average customers.