Part 1: How to Record Screen on Windows 10 with Xbox Game Bar

Step 1Go to the Start menu of your Windows and search for the Xbox application or use the Window + G key to launch Xbox Game Bar. Click the Yes this is a game button even your recording is not a game. You can capture screen video with any application on your Windows and even Internet browsers.

Step 3Once you have saved the recording, you can go to your Xbox app on the Start menu or click the Xbox button. Locate the recorded videos within the Game DVR menu. Moreover, you can also locate the files from the following path C:UsersusernameVideosCaptures folder on your PC. 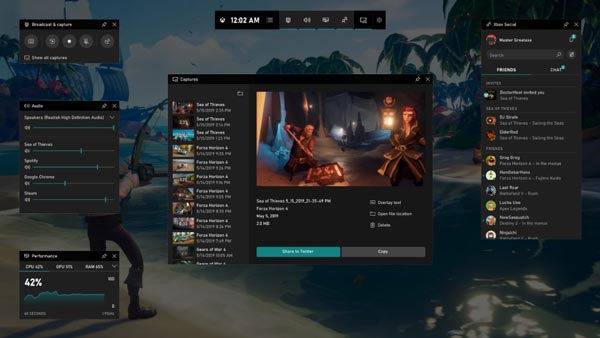 Part 2: How to Record Screen on Windows 10 without Xbox Game Bar

Is there an Xbox Game bar alternative to record all onscreen activities on Windows 10? When you need to find the method to record screen on Windows 10 without Xbox Game bar without restrictions, AnyRec Screen Recorder is the desired screen recorder to capture high quality videos. It enables you to set the frame rate up to 60FPS and save the videos to a wide set of video formats. Moreover, you can also find the schedule recording, recording history, editing features, and more advanced tools within the screen recorder for Windows 10.

Customize your recording area by choosing between full or custom recording

Step 1Download and install AnyRec Screen Recorder, which is compatible with Windows 10. You can choose the Video Recorder menu to capture all onscreen activities. Of course, you can also select the Game Recorder menu to record the gameplay video as Xbox Game bar on Windows 10.

Step 2Choose the Full option to record full screen on Windows 10. In addition, select your preferred video quality, such as 1080P, 720P, or 480P directly. Enable the System Sound option and the Microphone option to record video with audio files from different channels. It also enables you to add the webcam footage.

Step 3When you are ready to record your screen, go to the desired webpage or program you like to record. Simply tap the REC button to screen record on Windows 10 without Xbox Game bar. After the 3-second timer, there is an onscreen screen recorder manager indicating that recording has begun and is in progress.

Step 4During the recording process, you can also take screenshots by clicking the camera icon on the navigation bar. Moreover, there are some annotation tools, such as watermarks, callouts, lines, arrows, and more to mark up the highlights. When you're finished recording on your Windows device, simply press the Stop button.

Step 5You can trim the recorded video before saving it on your devices using the Clip feature. Just select the start point and the endpoint to cut out the desired part. After that, you can click the Save button to save the video to your computer or share the file to the desired social media websites directly.

Which should be your choice, the free Xbox Game bar or the professional AnyRec Screen Recorder? Should you screen record on Windows 10 without Xbox Game bar? Just take the comparison as a reference.

Part 4: FAQs about How to Record Screen on Windows 10

Xbox Game bar is a built-in video recorder for Windows 10. It enables you to capture limited content only, such as the gameplay video and browse app. When you want to record screen on Windows 10 without Xbox Game, AnyRec Screen Recorder is the all-in-one alternative you should take into consideration. Just learn more about the comparison and choose the desired one according to your requirement.