Simply pressing the power button and volume-low button together will take screenshots on your Android phone. iPhone also provides an overlay screenshot app in the control panel. However, you might have experienced some lacks from your built-in screenshot. For example, you can only capture the whole screen on your Android/iOS devices, and you need to edit them with other tool. Thus, in this post, you can search for the best screenshot app compatible with your device.

Part 1: 10 Best Screenshot Apps to Capture Every Moment on Android/iPhone

Some smartphones don't allow you to take a quick screenshot as some were built with facility and all. If you do not like the default screenshot app of your device, here are 10 best screenshot apps with different features you can download on Android and iOS.

A must-have tool if you are an Android user. The Assistive Touch Team made this excellent screenshot app with more useful tools included. It works smoothly on any Android device like smartphone and tablet. Like iOS built-in screenshot, Assistive Touch for Android also has a floating panel, giving you easy access whenever you need it. 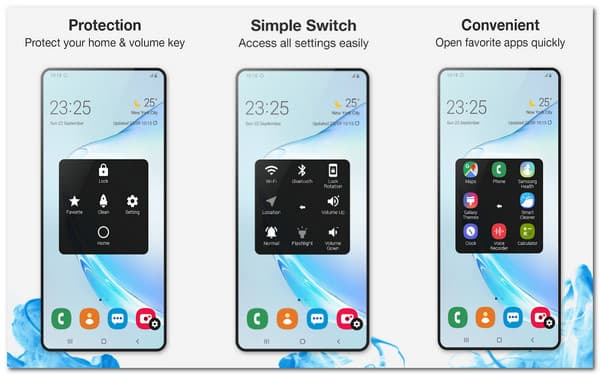 Cons
The android device should be at least a 5.0 version for the app. 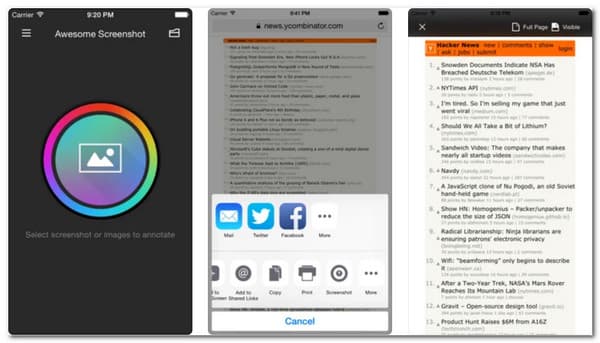 Cons
It does not work on some sites in Safari.

This best screenshot app is one of the most trusted apps for Android users. With over one million downloads, the answer is on users' reviews. The primary function of AZ Screen Recorder is to do screen recording on your phone. But even if you only use the screenshot feature, the picture is high quality. 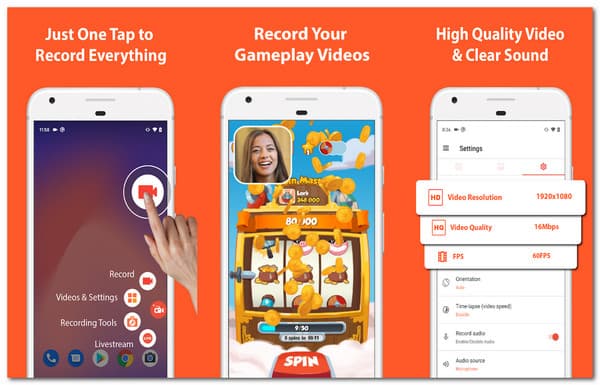 Pros
Free of charge and no watermark.
Screen recorder quality is up to 1080p.

Cons
Some users experience lags in the app.

Offered by Mayank Sanganeria, the Screenshort app is an ideal screenshot app for iOS users. It enables the cropping function for cropping the only important part of a screenshot. When you iPad/iPhone screenshot isn't working, it's the best choice to take screenshots and directly post them on your Twitter account. 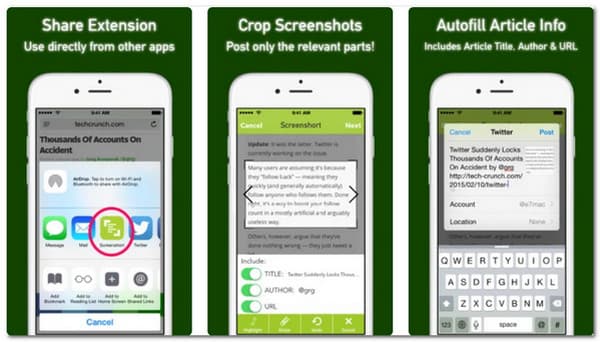 You can download the Capture App to quickly share screenshots with your coworkers, friends, or family. It prioritizes safe and secured photo sharing through any app. This screenshot app does not compress the captured images but will save them at full resolution and quality. Download this best screenshot app for free. 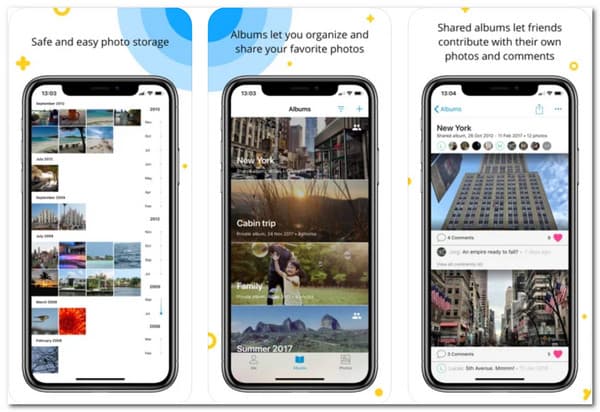 Pros
Offer 2GB storage space for screenshots.
Safely back up photos in the cloud.

Cons
Take time to sync photos, even on high-speed WiFi.

The Screenshot Maker Pro is another excellent screenshot app for iOS devices. It is simple than other screenshot apps, which saves up your time. The app was initially made for the iPad, but the developers created an iPhone version because of its quick screenshot functions. You can also use more of its features to enhance your images to share on social media. 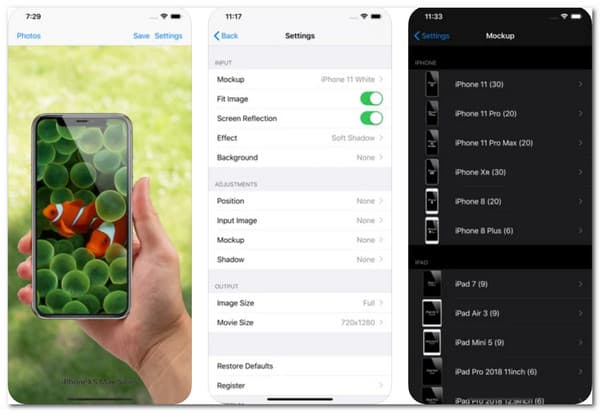 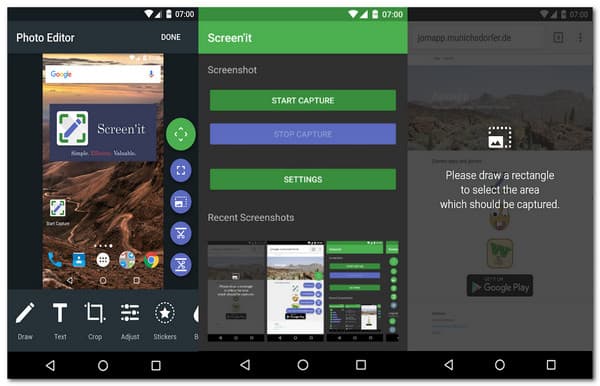 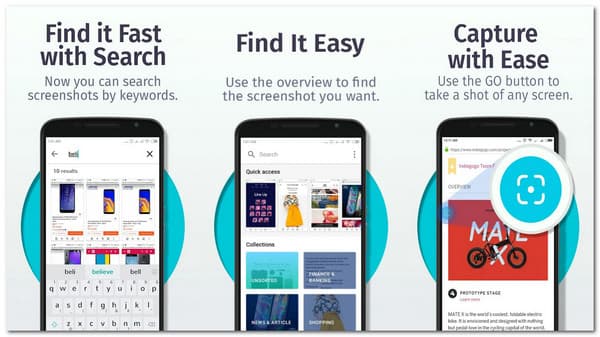 Pros
Search screenshots via keyword.
The Go button can be accessed easily.

Screen Capture and Recorder is another easy screenshot app for Android devices. It is packed with features that can enhance the screenshot you take. With its screen recorder feature, you can capture any phone activity up to 4K quality. This excellent screenshot app also provides a service for merging images to create a panorama-like image. 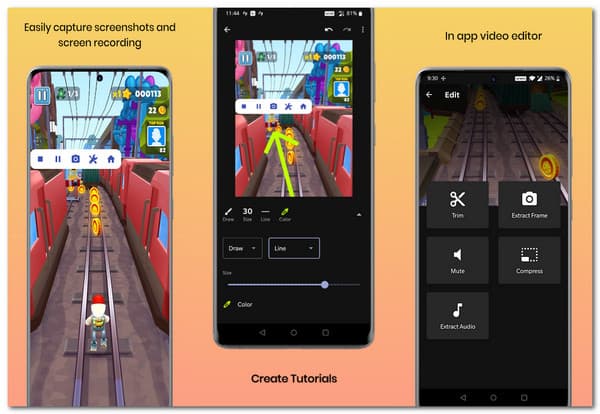 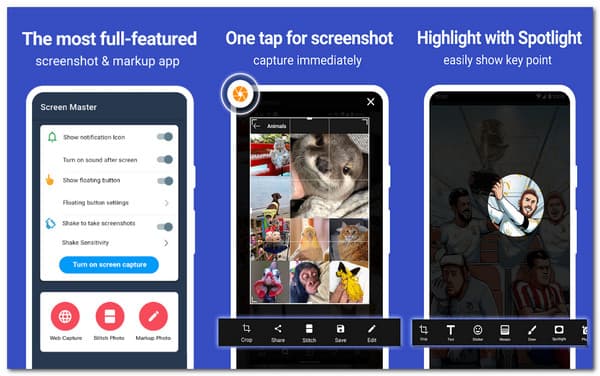 Pros
The screengrab function activates by shaking the device.
Save screenshots in high-quality resolution.

Cons
The status bar is visible in the images.

Even with a PC or laptop, you need a reliable screenshot app. Most users of Windows and Mac recommend AnyRec Screen Recorder because of its intuitive interface and powerful features. Since there are different activities you can do on a laptop or PC, AnyRec Screen Recorder can be customized to take a screenshot of the preferred area of the screen. It also allows you to capture the screen of your mobile through mirroring. Great for sharing photos over the internet or editing them with the provided tools.

Capture screenshots on your computers and mobiles in high quality.

Part 2: FAQs about the Best Screenshot App on Android/iPhone

These best screenshot apps can save you waste your time editing captured photos on image editors. As most of the recommended apps have editing tools to offer, nothing can stop you from being productive and creative. You can also have a try on AnyRec Screen Recorder to capture mobile screen on your Windows/Mac. If you have more questions about screenshot apps, please contact us now.