Steam is a cloud-based platform for playing, discussing, and even creating games all over the world. There is no Steam built-in video recording function. Thus, you need to use a Steam recorder to capture every kill and highlight. The followings are 4 proven ways to record on Steam on Windows 10/8/7 and Mac. You can create Steam recordings and Steam screenshots on your computer without lagging.

Part 1: How to Record Steam Games without FPS Drop

Every second is important when you play a Steam game. If you don't want to slow down your computer, it is suggested to record on Steam with AnyRec Screen Recorder. It can be your best no lag game recorder. Thanks to the advanced GPU acceleration tech, you can record gameplay on Steam with no lag. Even though you use an old low-end computer, you can still record and play Steam games smoothly.

Record Steam games with your face and commentary.

Use hotkeys to control Steam recordings and captures.

Track mouse movements/clicks and add text/line/arrow while recording on Steam.

Step 3Turn on Webcam if you want to record yourself on Steam. Then turn on System Sound and Microphone to record Steam game audio and voiceover selectively.

Step 4Click the gear Settings icon. In the Preferences window, you can change video output settings, hotkey controls, and more. Click OK to save changes.

Step 5After all customizations, click REC to start recording on Steam game. You can get Steam screen capture images instantly by clicking its Screenshot icon.

Step 6When you stop recording Steam, you will be in the Preview window. Trim unwanted clips if necessary. At last, click Save and follow its instruction to complete Steam game recording.

Part 2: How to Record Steam Gameplay Online for Free

Step 1Visit the free online game recorder on your recorder. Click Record for Free followed by download. The first time you record Steam online, you need to install its launcher first.

Step 2Set the screen capture area as full screen or custom region. Turn on Speaker and Microphone to record Steam with game audio and your voice.

Step 4Click Stop to end up Steam game recording. You can get the Steam recording video in MP4/WMV on desktop instantly.

Part 3: How to Record on Steam with Windows 10 Game DVR

Step 1Open the Steam game you want to capture first.

Step 2Go to the Windows Start menu. Search for Game DVR to access it. (Or you can hold and press Windows and G keys on the keyboard to activate Game Bar as well.)

Step 3Go to recording settings, you can specify Steam game recording preferences in General, Audio, and other tabs.

Step 6Go to Gallery to see all game clips and screenshots of Steam gameplay.

Part 4: How to Record Steam Games with OBS

OBS Studio is also a hot choice for game recording. You can record and stream Steam game with OBS Studio. It is supported to record Steam on PC up to 1080p 60fps. Moreover, you can configure audio mixers, video source filters, and other settings before recording Steam with OBS.

Step 1Launch OBS Studio after the installation. Under the Scenes section, click + to create a new recording project.

Step 2Set Steam game window as the game capture source. You can choose Capture Specific Window and then select your Steam window.

Step 3Click Start Recording on the lower right corner. Now you can take a video on Steam with OBS and save it. 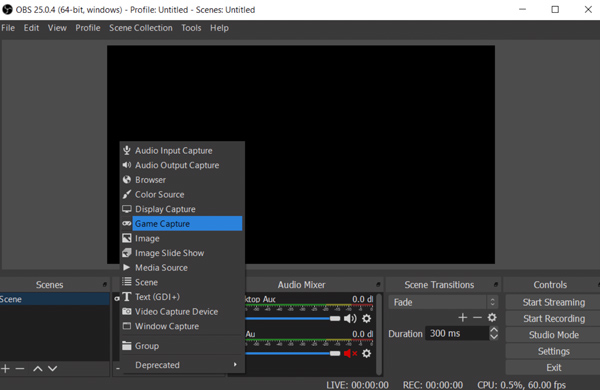